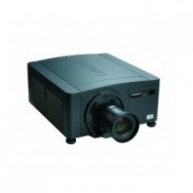 The most compact in its class, this award-winning, dual mercury lamp platform provides the high-performance and feature-rich standards you expect in all Christie products. We continue to deliver brightness, versatility, reliability and affordability in this latest addition to the Christie family of display solutions.

Rounding out the offering with five more projectors, in WXGA and WUXGA resolutions, the M Series can now be used in those applications where a wide Aspect ratio is required.

Adjust the number of lamps and power level used
Control the fan speed to cool the system
Shut down (automatically) when the projector does not receive a signal
Customize real-time events programming according to your business needs
The Christie WU12K-M has a variable contrast ratio of 2500-10000:1 (FOFO) / 650:1 ANSI for crisp, detailed images.

With the consistency of DLP technology, the Christie M Series offers reliable, affordable, dual- mercury lamp brightness, in the smallest chassis in its class. Combined with the additional standard features, expanded lens suite, four resolutions, and industry-leading Christie service, the M Series provides high performance and peace of mind for all users.