These Wholehog II consoles are in good condition.

Both units each have one newer touchscreen (better contrast) and one original screen.

The silkscreening is not worn, and the buttons (except for one enter key) still have clear printing on them. 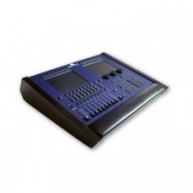