Sony Corporation of America, based in New York City, is the U.S. subsidiary of Sony Corporation, headquartered in Tokyo. Sony is a leading manufacturer of audio, video, communications, and information technology products for the consumer and... 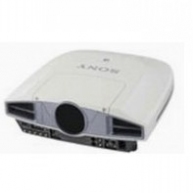 Delivering a high-brightness output of 6000 ANSI lumens* in a stylish body, the
VPL-FX52 is an excellent choice for high-impact multimedia presentations. For any
number of applications ranging from business conferences and seminars to
education, in locations such as auditoriums, large conference rooms and lecture
halls, the VPL-FX52 will captivate audiences with breathtaking image quality.
Seen from any angle, this beautifully designed projector brings an elegant and
stylish addition to any display environment. Its outstanding functionality including
the ability to project high-quality images, networking capability, and installation
flexibility gives you the power to show your presentations and image files with
exceptional clarity. Whats more, the projectors ability to accept almost any kind of
signal makes presentations from a variety of sources much more feasible. And with
the VPL-FX52L, you can choose a lens that meets your application requirements.
With additional functionality including Smart APA (Auto Pixel Alignment), a Direct
Power On feature, and user-friendly operation, the VPL-FX52 is an ideal projector
for almost any large conference room or auditorium make it your choice!
* ANSI lumen is a measuring method of the American National Standards Institute IT7.228. Since there is no
uniform method of measuring brightness, specifications will vary among manufacturers.
A

Sony Corporation of America, based in New York City, is the U.S. subsidiary of Sony Corporation, headquartered in Tokyo. Sony is a leading manufacturer of audio, video, communications, and information technology products for the consumer and professional markets. Its music, motion picture, television, computer entertainment, and online businesses make Sony one of the most comprehensive entertainment companies in the world. Sony's principal U.S. businesses include Sony Electronics Inc., Sony Pictures Entertainment, Sony Computer Entertainment America Inc., and a 50% interest in SONY BMG MUSIC ENTERTAINMENT, one of the largest recorded music companies in the world. Sony recorded consolidated annual sales of approximately $67 billion for the fiscal year ended March 31, 2005, and it employs 151,400 people worldwide. Sony's consolidated sales in the U.S. for the fiscal year ended March 31, 2005 were $18.4 billion.