A "technical creative soul" has kept Vari-Lite at the forefront of the automated lighting industry since 1981. The company is founded on the belief that creative engineering can join with creative lighting to bring a new dimension to any... 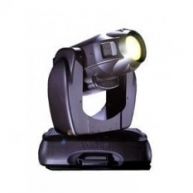 The VL2000 Spot luminaire accepts a wide variety of colors and Gobos. Two fixed wheels are included, one factory configured for Gobos and the second for color filters. A standard palette of Gobos and colors is provided with the unit. Custom Gobos are available.

The VL2000 Spot luminaire can be controlled a wide variety of DMX-512 consoles.

A "technical creative soul" has kept Vari-Lite at the forefront of the automated lighting industry since 1981. The company is founded on the belief that creative engineering can join with creative lighting to bring a new dimension to any performance or presentation. That notion first took root when Rusty BrutschĂ© and Jack Maxson founded Showco in 1970. Innovation made Showco the premier sound and lighting equipment rental firm for the concert touring industry. A decade following Showco's initial success, company officials found themselves working on another technical leap, this time within the field of automated lighting. Until the 1980s, stage lighting systems for concerts and theater productions were bulky with numerous fixtures (a typical rock concert usually required up to 3,000 separate lights). Each light had to be manually focused and colored using celluloid gel material placed in front of each lighting fixture. To achieve color changes, the lighting fixtures had to be turned on and off or dimmed using electronic dimmers controlled by a computer lighting console. Throughout the late '70s, engineers worked to develop a color changer for a lighting fixture. Finally, they arrived at a solution: forget the "add-on" schemes, and concentrate on using internal dichroic coated glass filters and metal halide bulbs. The dichroic filters could be used to change colors almost instantaneously and create saturated colors not capable from the gel filters. That might have been the extent of their advancement if for a barbecue lunch in the fall of 1980. At that gathering, the idea of adding two extra motors to the fixture to actually make the light move was conceived. This "eureka" moment facilitated an all-out building effort for a fully automated lighting system that resulted in a prototype in December 1980. Shortly thereafter, the engineering team flew to London to show the prototype automated light (named "VL Zero") to longtime Showco client, Genesis. The British band had long been at the forefront of cutting-edge performance art technology, and was in rehearsal for an upcoming tour. At an English countryside studio, the new luminaire made its debut on the side of a 500-year-old barn. The prototype light had been programmed to enact two simple cues. The first reaction from the presentation came from band member Mike Rutherford: "I expected the color change, but by jove, I didn't know it was going to move." It was enough to convince Genesis to immediately invest in developing this new technology. Genesis wowed the audience with the first VARI*LITEÂ® Series 100â?˘ system consisting of 50 VL1â?˘ luminaires and a computerized control console on the opening night of their "Abacab" tour on September 25, 1981 in a bullring in Barcelona, Spain. That rural demonstration was the "Genesis" of a new company - Vari-Lite, coined from a suggestion by Genesis manager Tony Smith. The new system was developed, complete with a programmable console that enabled lighting designers to create lighting effects that electrified the lighting industry and began a revolution that continues to this day. The dichroic color changing system allowed for up to 60 preselected colors to be changed in less than a tenth of a second and the computer control of the color change, dimming and movement of the light beams created stunning visual effects. The original VARI*LITE system was patented in 1983, and Vari-Lite has received numerous other U.S. and international patents on automated lighting technology as it has continued to innovate and develop the technology. Inspired by the magic of moving light and changing color, Vari-Lite set about creating complete lighting systems that add subtle nuance or brilliant spectacle to any event. The company offers designers the ultimate tool for creating lighting moments to remember. Since the beginning, Vari-Lite has led the world in automated lighting technology; developing pioneering products with an unrivaled reputation. Today, lighting professionals in theatre, television, concerts, motion pictures, corporate shows and advertising, look to Vari-Lite for inspiration and support for their productions.