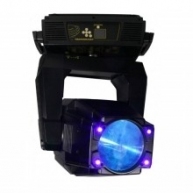 Designed for a wide variety of small and medium scale performance applications, TechnoArc is a compact soft-edge luminaire with exceptional value and performance. A natural companion to the Technospot, this full featured fixture is designed for club, stage, and studio applications where environmental durability and high quality output are required.

TechnoArc offers designers and operators a versatile, fully integrated system with unprecedented brightness, speed and accuracy for a light of its kind.