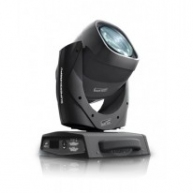 After the Sharpys extraordinary worldwide success, Clay Paky is now launching the SuperSharpy, an ACL beam type moving head featuring a 470 watt, 7,000 K lamp. If you have been amazed at how bright the Sharpy is, the SuperSharpy will leave you literally stunned. Its light beam is nothing short of four times brighter, with a far bigger difference than you would expect by simply comparing the rated wattage of the two lamps (470 vs 190). Thanks to this incredible output, the SuperSharpys light reaches never-seen-before mid-air distances, making the SuperSharpy the first low-wattage beam light that can really challenge a searchlight.
However Clay Paky has not settled for merely producing a more powerful beam light. The SuperSharpy also provides the utmost in terms of light quality and number of effects.