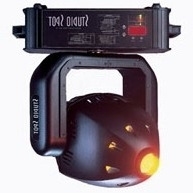 The Studio Spot CMY is a hard-edged moving yoke light that features graduated color wheels to provide smooth, infinite CMY color mixing. Its superior optics also offer the user a range of options from beam-shaping effects to LithoPatterns projection of standard or custom images, logos or patterns for near photo-quality projection. Ten user-selectable Gobos/effects can be installed into two rotating gobo wheels for a wide variety of pattern or logo projection.