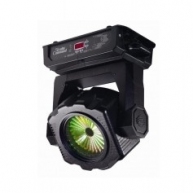 Studio Command offers lighting professionals a ??command performance in the most demanding events, be it in the theatrical, corporate, concert touring, house of worship markets or any other show or installation requiring a powerful wash fixture.