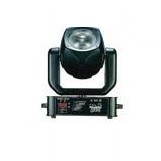 Studio Color 575 S is the optimum wash light for powerful color mixing and beam shaping. This fixture offers a full designer's palette, including virtually unlimited color selection, dimming, Strobe and shutter, variable beam-shaping, variable frosting, and precision positioning. Its quiet, convection cooling has established it as a favorite among theatre designers. This amazing combination of features has made the Studio Color 575 a staple of the entertainment industry.