Purchase 2 pcs to get a free flightcase! 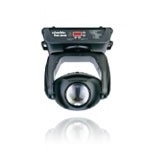