Lights are in exellent condition have 1900 working hours or less. Fited with lamps (cca 160h) Were used in a TV studio for the last 3 years, weekly for 3 hours. 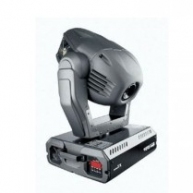