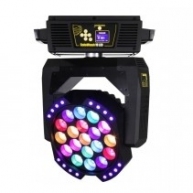 Powered by 15 watt RGBW LEDs as well as the addition of the deep hues provided by Indigo Highlighter, these fast, compact and versatile fixtures are perfect for applications from Rock and Roll to Theatre. Features such as built in dynamic patterns and lenses, a 12 to 65 degree zoom, variable CTO and multiple fixture modes make SolaWash the right wash lights for any show.