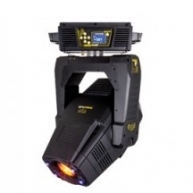 SolaSpot Pro CMY LED
Where white really is white and colors are saturated!

The next generation has truly arrived with the brightest, most feature rich, LED hard edge fixture on the market today. Outputting over 13,000 lumens from a 320 w LED source, not only is this the brightest but also the most efficient LED spot available.

Lighting designers no longer need to make compromises between the quality of white and color, and they no longer have to worry about the quantity of output. With SolaSpot Pro CMY LED, the industry has finally got an LED tool to truly replace existing 700w and some 800w arc fixtures! All this coupled with the long life of the LED source.

Alongside yet another industry first when it comes to LED and CMY, are features like Linear CTO, 2 gobo wheels, a fixed color wheel, incredibly quick zoom and focus, a prism, iris and frost, making this a true work horse of the future.