Previously used on various rentals. Cleaned and maintained by in house technicians. 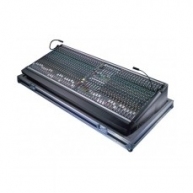 The SM24 has been designed in consultation with top engineers to provide the
ultimate tool for onstage monitor mixing.
The key features of the SM24 are:
A total of 26 busses reconfigure to provide almost any combination of mono
and stereo mixes
Dedicated stereo send, for sidefills or main mix output in FOH applications
4 band parametric EQ plus variable High-Pass filter on all input channels
Logic controlled solo system with autocancel, input priority and solo clear
functions
Full audio and logic console linking
VCA and Mute Masters offer a total of 16 mute groups
All inputs and outputs fully balanced
Channel Inserts and Direct Outputs are Ground Compensated as standard
Frame Sizes
The SM24 is available in 3 compact frame sizes:
32 channel
40 channel
48 channel
Power Supplies
All frame sizes use the CPS1000 PSU. Connection to the console is via an 8-way
and a 16-way SRC connector. The SRC panel also carries a ground binding post.
Lamps
Three BNC connectors for lamps are fitted to all frame sizes - one on the master
module, and one at either end of the console on the infill panels. The are suitable
for Littlite or similar 12V lamps taking up to 330mA each. The voltage supply to
the lamps can be varied between 1.5V (dim) and 12V (bright) by the Dimmer control.
The console features rear COMMS LINK connectors to allow a Clearcom system
to be looped through. When a 'call' button is pressed on the Clearcom unit, the
lamps are flashed to signal the engineer.