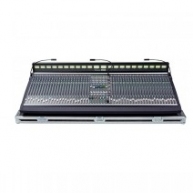 SM20 is the latest addition to Soundcraft's respected range of dedicated stage monitor consoles, and has been designed to take account of the continuing trend towards use of in-ear monitoring systems, brought about by the rapidly falling cost of these systems.

Drawing on Elements from previous SM consoles, the SM20 packs more features into a smaller size than any of its predecessors.

The SM20 is available in three frame sizes providing 40, 48 and 56 inputs into 20 outputs, with the user-friendly control layout pioneered on the earlier SM consoles.

Unprecedented power has been added to the console inputs in the form of a sweepable high-pass filter, fully parametric mid-bands on the EQ, and globally switchable mono or stereo sends, giving any combination between 20 straight mono sends and 7 stereo plus 6 monos. Other new features include a built-in mic split facility, and MIDI control of external BSS Varicurve? or dbx DriveRack? equalisers.