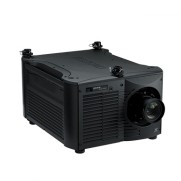 Creating visually compelling displays is paramount to your success. Thats our business too, so weve made higher brightness, Christie Twist, 3D upgradability and flexibility standard in the Christie Roadster WU20K-J. Youll see weve upgraded our existing Xenon 3-chip DLP platform with the features and functionality that you rely on to share, collaborate and create.

Ideal for large venues - building displays, churches, classrooms, concerts, conference rooms, live events, tradeshows and more, the Roadster WU20K-J is fitted with the broadest range of high-quality lenses all with Intelligent Lens System (ILS) capabilities. You can use existing stacking hardware, lenses1, lamps, input cards2 and other Christie accessories with this new line of projectors. Fly, rig, stack and ship it - the Roadster WU20K-J performs flawlessly.

This projector couples the benefits of Xenon illumination for the most natural color accuracy and stability - with the next level of technology, performance and flexibility. The additional standard features, an expanded lens suite and world-renowned Christie warranties, service and support, ensure the Christie Roadster WU20K-J provides high performance and more lumens per watt in the smallest chassis in its class.

With the Christie J Series you can customize your model according to your needs. Each projector ships standard with the ILS lens mount, but if you prefer to use your existing inventory of CT lenses or require a yellow notch filter (YNF), you can choose, at the time of purchase, the following options: