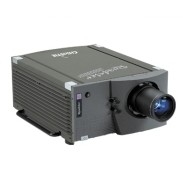 Powerhouse brightness and flexibility in a portable package - a staggering 8500 ANSI lumens - makes the S9 the brightest and most cost-effective SXGA projector in its class. With exceptional image clarity and color uniformity, the S9 is a portable presentation power that excels in the most challenging environments. A unique self-adjusting Power Supply minimizes lamp fade over time, ensuring superior performance and reduced operating costs. ILS, LiteLOC, and image offset offer a greater range of control, projector positioning and projector angles for onsite flexibility and ease of integration into any application.