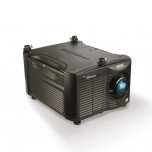 The Christie HD Series the brightest, clearest HD imaging available in the world.