CHAUVET began in the 80s as an OEM distributor and manufacturer from a modest warehouse in North Miami Beach, FL. Today CHAUVET is a major innovator, developer and manufacturer, leading the lighting entertainment market in terms of design,... 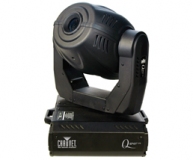 The Q-Spot? 575 is a 16-channel DMX-512 moving yoke fixture with 540 degrees of pan and 270 degrees of tilt. It features a variable Strobe and shutter system, and both a static and indexed rotating gobo wheel. The color wheel features 10 colors plus white. A 3-facet, high-speed prism rotates bi-directionally at variable speeds. The two gobo wheels feature a total of 15 interchangeable Gobos, with the indexed wheel also featuring Gobo Bounce. Automatic pan and tilt correction, 16 bit pan and tilt resolution, and an HMI575, 575 watt lamp makes this the ultimate stage wash solution for permanent and semi-permanent installations.

CHAUVET began in the 80s as an OEM distributor and manufacturer from a modest warehouse in North Miami Beach, FL. Today CHAUVET is a major innovator, developer and manufacturer, leading the lighting entertainment market in terms of design, flexibility and options. Our formula is simple: the right products at the right price. Sold through a network of highly professional dealers and distributors, the CHAUVET brand has a global reach built around three core tenets: Value, Innovation, Performance- VIP for short. Professional moving yokes, scanners, wash lights and controllers drive the bulk of CHAUVETs growth. The company also actively pursues new technologies and markets in LED, laser and architectural illumination. Most products are manufactured in Asia. Product design, marketing, technical support, sales, sourcing, quality control, warehousing and shipping are handled in the USA. A passion for lighting and the drive to excel unite an otherwise diverse staff of 50 at the South Florida headquarters. All share the realization that, beyond top-of-the line products, straightforward advice, after-sale service, and support are key to a truly satisfied customer.