We have one new Panasonic PT-EX16K with no previous use at all.
The projector has been checked and serviced by our technicians. 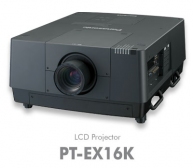