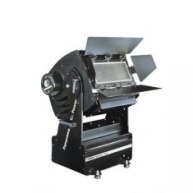 Utilising Coemar's patented Twin Lamp Technology (TLT) the Panorama Cyc Power dramatically increases the luminous output whilst minimising the power consumption. The Panorama Cyc Power has the ability to use either 1000 hours lamps or even long life 3000 hours lamps for architectural installations make it the perfect choice for building illumination and large scale indoor or exterior projects where a wide even coverage of illumination is required, with the added ability of infinite colour change. Manufactured in aluminium and stainless steel sheet the Panorama Cyc Power has weather protection, high resistance matt black polyester paint.