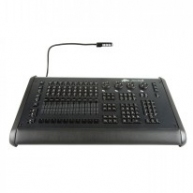 Coupled with Hog 4 PC, the Nano Hog 4 provides the user with a single unified surface, turning a laptop or desktop into a fully fledged, powerful and intuitive lighting console. Any PC running Hog 4 PC can connect to the Nano Hog 4 over USB creating a state of the art control surface. Utilizing the same front panel as the Road Hog 4, users will immediately feel at home on the Nano Hog 4. There are also two slots for the optional addition of either Super Widgets and/or MIDI/LTC Widgets.