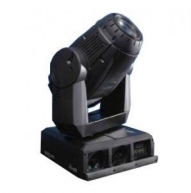 The MAC 2000 Profile E is a high performance lighting tool for touring, theater and special event applications. Based on input from some of the world's top lighting professionals, the MAC 2000 E Profile delivers an exceptional combination of extreme power and new projection possibilities. This is the Electronic Ballast version for this fixture.