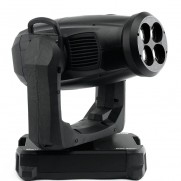 The MAC Viper Quadray is a never-before-seen, multiple-beam effect that adds a whole new dimension to the lighting designer toolbox. Available as an easy-to-install front lens replacement kit for any standard MAC Viper AirFX, the Quadray allows for projection of 1, 2, 3 or 4 individually-controllable rays of light for all-new static or dynamic possibilities in mid-air effects. It includes an efficient effects engine that allows designers to create a whole new variety of looks that would otherwise be hard, or even impossible, to program via a lighting console.

The MAC Viper Quadray houses the same high-quality feature set as the MAC Viper AirFX, including a vibrant color mixing system and stunning aerial effects, and has inherited the same compact form, impressive speed and superior light quality from a 1000-watt lamp.