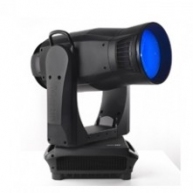 The 1500-watt MAC III AirFX is an extremely bright and highly versatile lighting fixture, a new concept that combines hard-edge, mid-air effects and a beautiful wash field in one luminaire. Capable of projecting a dense, hard-edge beam with stunning mid-air aerial effects, the fixtures unique optical system allows it to adjust from a tight beam to a radiant wash instantly for greater design flexibility.

Super bright, the MAC III AirFX is powerful enough to cut through light from even the most powerful LED screens.