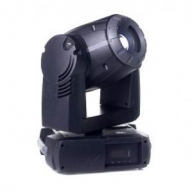 The new MAC 250 Krypton features a number of significant changes that make this moving head suited to an even wider variety of markets - the club and discotheque scene, retail and leisure applications, special events and more.