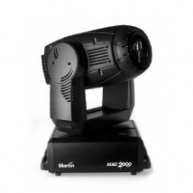 The first in the MAC 2000 series, the MAC 2000 Profile II is a high performance lighting tool for touring, theater and special event applications. Based on input from some of the world's top lighting professionals, the MAC 2000 II Series delivers an exceptional combination of extreme power and new projection possibilities.