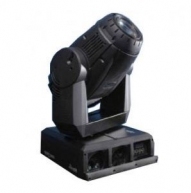 The MAC 2000 Performance features a mechanized framing system and gobo animation module as well as a gobo and effect wheel, CMY system and much more.