Previously used in rentals. Cleaned, maintained, and tested by authorized technicians.
Hours 400 to 800 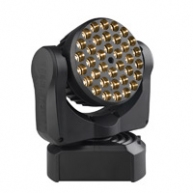 The MAC 101 WRM uses pure warm LEDs to mimic the warmth of tungsten halogen and is intensity controllable.

The ultra-compact MAC 101 LED moving head wash is available in three White Light versions that expand its use to applications where high quality, pure White Light is needed. Ideal for highlighting skin tones, textiles, or set pieces, the MAC 101 variants incorporate cold and/or warm LEDs instead of RGB for a better White Light quality and greater output.