We have one used Eiki LC-XT4 previously used in rentals or corporate events.
The projector has been checked and serviced by our technicians. 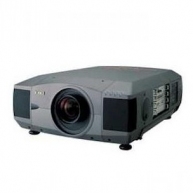