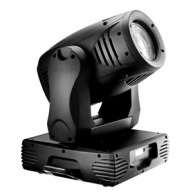 With its 700W lamp, IDEA WASH 700 has a powerful luminous beam that evenly lights backdrops or objects to be illuminated at any distance.

Thanks to its advanced design, IDEA WASH 700 offers as standard some electronic functions typical of fixtures of a higher class: with its linear zoom, it is possible to open the beam from 13 to 50 without any change in luminous performance; the electronic ballast ensures a flicker-free light beam and, with the CMY colour mixing system, creative staff members have endless colour combinations at their disposal.

The wireless DMX system and the back-up battery, which powers the setting display even when the unit is switched off, make it an Avant-garde instrument that is always easy to install and ready for use.