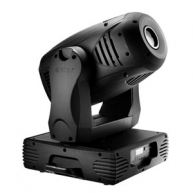 Light and easy to handle, with its 700W lamp IDEA SPOT 700 produces a concentrated, steady and very bright beam. Like fixtures of a higher class, IDEA SPOT 700 has technically Avant-garde features, such as an electronic ballast (which makes the unit flicker-free and lighter), a linear zoom that ensures fast precise beam aperture from 14 to 30 and a CMY colour mixing system.

Perfect for lighting even far-off areas with intense colours and clear-cut effects, IDEA SPOT 700 is even more practical thanks to its back-up battery, which enables settings to be seen on the units display even when it is switched off.

Its wireless DMX interface (fitted as standard) eliminates troublesome Cable runs between the fixture and its control unit, greatly facilitating installation and use.