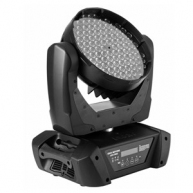 A matrix of 108 high-power LEDs produces a wash with exceptional colours, whose shades vary from the deepest tones to the softest lightest ones.

Optional interchangeable lenses offer various projection angles and allow IDEA MOVING LED 300 to be used at different distances from the objects to be illuminated.

Thanks to their extremely easy intuitive operation, IDEA MOVING LED 300 is the ideal Solution for touring, television studios and night venues