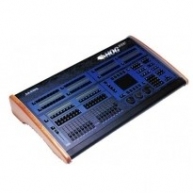 The Hog 500 and Hog 1000 consoles integrate unprecedented power and functionality in compact lighting controllers. These consoles offer a Classic alternative.

Both consoles include many of the Classic Wholehog 2's most powerful features, including Effects Engine, playback and 3D positional programming. Designers and programmers familiar with the Wholehog 2 operating system will be instantly comfortable using these boards.