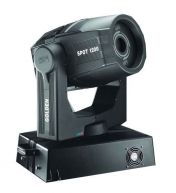 Golden Spot 1200 is a very powerful moving body effects projector with an HMI 1200W/S lamp that offers cutting-edge performance whilst meeting any budget.
In the 10+3 channels, the projector offers two separate gobo wheels: one for bi-directional rotating Gobos with adjustable speed, all indexable over 540deg with selectable 8 or 16 bit resolution, and the other for fixed Gobos. These two gobo wheels can also be used in combination.
The Gobos can be interchanged and selected from a vast range of dichroic and photographic versions, in decorative glass or metal.

The optical unit uses a wide-angle 24deg lens with electronic focusing, which ensures a perfectly clear image at any distance and aperture. An additional lens, housed inside the projector, can be fitted by hand to reduce the light beam to 15deg.