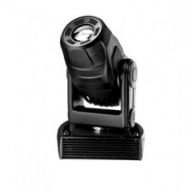 Giotto Spot 700 is the latest evolution in the Giotto range of fixtures.

Giotto Spot 700 features CYM colour mixing, to create an unlimited quantity of colours and different shades, Linear CTO, two wheels with rotating interchangeable Gobos (each with 8 slots plus white) a 6-colour plus white colour wheel and an easily changed Animation Wheel to create all kinds of animated effects.

Giotto Spot 700 completes the Giotto range, offering the maximum lighting professionals could wish to show their creativity at its best.