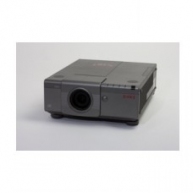 Get the film-like imaging of DLP technology in a projector with conference room brightness and built-in network control.