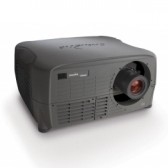 The smallest, high-performance 3-chip DLP product on the market, the Christie DW5K is native 1280 x 720 resolution with a variable contrast ratio for crisp, detailed widescreen images. With Xenon illumination for photo-realistic colors, 10-bit processing for a broader color spectrum and wider input signal compatibility and the consistency and reliability of DLP technology, the Christie DW5K is ideal for churches, post-production facilities, home cinema, conference/boardrooms or training rooms.

With price performance on the market, most reliability, lowest cost of ownership, best warranties available and renowned customer service all add up to peace of mind with Christie. The Christie DW5K - the pinnacle of image color accuracy and adjustability in an easy to use, flexible package.