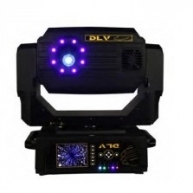 DLV Logo
The DLV Digital Light represents the next evolution in creative lighting. Built on the same industry standard software as the DL.3 Digital Light and Axon Media Server, the DLV brings digital lighting abilities to any stage, club, or application. The DLV integrates a media server loaded with royalty free content with a high output 3-chip LCD light engine. DLV mounts like any other intelligent moving luminaire and controls just as easily with plug-and-play operation using standard DMX or Art-Net cabling and protocols.

With over 4000 lumens from the compact unit, the DLV is capable of bright dynamic projections and Strong aerial imagery. Never before has digital lighting been as affordable and easy for a large range of production types. The DLV allows simple uploads of custom content and 3D objects directly from the Content Management Application. Now any Venue can create powerful media presentations directly from any lighting controller. The proven DL.3/Axon software comes loaded with effects, Collage Generator, Curved Surface Support and more. With the DLV, the power to create is in your hands!

The DLV is the first digital light to include the innovative Indigo Highlighter feature. Providing designers with additional light output from eight 1-watt indigo LEDs further increases the layering abilities of the DLV.

High End Systems not only started the digital revolution, it also offers the widest digital lighting product mix of any manufacturer, priced and scaled for any budget and solution.