All tested by Christie. Comes with a 3 month warranty. 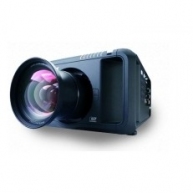 The Christie DHD800 1-chip DLP digital projector offers full HD and high brightness, making it ideally suited for a variety of applications including fixed installs and live events. At 8000 ANSI lumens, it's one of the brightest 1-chip DLP dual lamp projectors on the market. With its HD (1920 x 1080) resolution, this projector is compatible with most computers and video sources.

A unique, user-changeable, twin-color wheel system gives you the flexibility to tailor your presentations to maximize high brightness images and achieve superior color reproduction. The Christie DHD800 also includes a lamp interval feature that enables you to select the interval times for balanced lamp usage. Along with its long life dual lamps and sealed optical engine, these features ensure the Christie DHD800 provides a low cost of ownership.