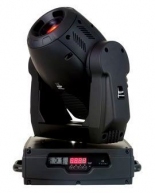 FOCUS
? Motor driven focus from near to far