This 575e AT was purchased solely as a demo unit and was shown to several customers over a period of three years. It's in like new condition. 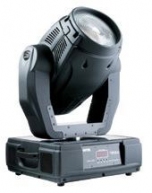 The ColorWash 575E AT is an electronic ballast version of the ColorWash 575 AT, which sees an expansion of features like flicker-free operation, enhanced light output, extended lamp life, power-saving mode for economy and reduced weight. The same large LCD display - first featured on the ColorSpot 1200 AT enhances the fixture's user-friendliness. An Ethernet connection is also available with the 575E AT version. ColorWash 575E AT is ideal for theatres, TV studios, medium sized stage applications and all applications requiring a 'workhorse' 575 lamp. Offering full CMY, variable CTO, colour-wheel with 5 replaceable colours + open, combined dimmer/shutter and rotatable beam Shaper, indexable 360deg with continuous rotation. The standard zoom angle has a range of 12-34deg, extendable with an optional lens to make 24-60deg, currently the most flexible zoom range on the market. The ColorWash 575 AT follows the hugely popular Robe Wash 575 XT Series fixture.