In most cases will come with a full factory warranty of either 2-3 years. Call for specific warranty details of this product. 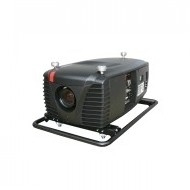 Crisp visuals even in bright environments

Our CLM R10++ features the Barco engineered picture-in-picture functionality, which allows two sources to be displayed simultaneously on one screen, in any combination of data and video. Combined with its Strong light output, this makes the CLM ideal for mid- to large-sized presentation venues.

The CLM R10++ can handle a wide array of sources, including all currently supported video formats and broadcasting signals. Its RS232 and TCP/IP ports enable connection to a host of Remote Control devices, while its low size, weight and noise levels make the CLM R10++ an efficient, quiet Solution that looks good in any brightly lit room. What's more, it can be stacked in multiples in case even brighter light outputs are required. Its quad-lamp system also spectacularly enhances its lifetime, rendering the CLM R10++ virtually maintenance-free.