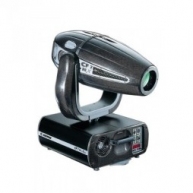 The CF 7 HE X is a professional moving yoke fixture, ideal for concert touring applications, large clubs and venues with high ceilings and long throw distances. Along with the latest technologies incorporated within, the CF 7 HE X has the ability to provide variable beam from a pin spot up to a wide dispersed beam, with the powerful 700W short arc light source have instantly rocketed it to succes within the concert touring market worldwide. Made in carbon fiber and aluminium components the CF 7 HE X has an IP20 protection rating.