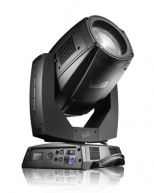 This fixture is the top washlight in the Alpha range, featuring a 1500 W lamp, enhanced optics and a comprehensive colour generation system. The beam is fully sizeable thanks to the extra-wide 11 - 74 zoom range, clean from centre to edge. Colours are generated through combinable CMY system, 2 colour wheels, with pure dichroic filters, and the special Golden CTO", allowing smooth adjustment from 2500K to 6000K.