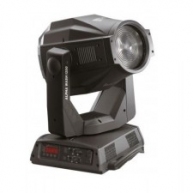 Alpha Wash 1200 is the most powerful washlight in the Alpha family, with all the technological, structural and reliability advantages of this line.
The optical system uses uniform CMY color mixing that, together with a color wheel, with linear CTO and with a CTB filter, allows every chromatic combination to be obtained.
A further chromatic refinement can be obtained by choosing between two lamps on the pricelist, with different colour temperatures.
Its wide linear zoom and the surprising brightness, even at maximum aperture, allows its short, medium and long range use, in professional and architectural lighting.