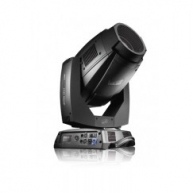 This 1500 W moving head is the most impressive graphic effects Spotlight available, with an incredible array of colour and imagery devices, including 20 Gobos on 3 wheels, animation disc, rotating prism and the exclusive Automated-Star-Gobo (patent pending). All devices are fully combinable with limitless rotation and morphing possibilities. The zoom has an extreme aperture range from 7 to 57 (1:8 ratio) with an amazing 120 bpm speed. An auto-focusing function combined with the Dyna-Cue-Creator make programming and operation easy and creative. A special high definition iris, the advanced Zoom-Tracking-Diffuser and silent operation position Alpha HPE 1500 at the edge of show-lighting technology.