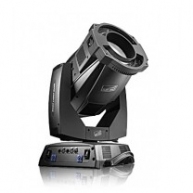 Shotlight Wash is a totally new kind of projector that combines an extraordinary 1500W discharge lamp washlight and a 3000W Xenon lamp Strobe in just one device. The two wash/Strobe functions are perfectly integrated and can be operator-controlled with either simultaneous or separate operation and Special Effects. The Strobe" function is provided by two semi-circular Xenon lamps working independently, i.e. they can flash together or separately, at different frequencies.