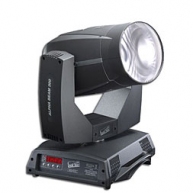 The Clay Paky Alpha Beam 300 became very popular and immediately recognized for it's powerful output with such a low wattage lamp due to it's advanced optics. It was well received by industry professionals alike.

Exclusively presented by Clay Paky, ALPHA BEAM 300 produces a superconcentrated near parallel light beam, for a use very similar to that of a Par 64 ACL, always present in all the big Rock'n'Roll shows, but with superior and innovative features.

The new, special Clay Paky optical group, with a 300 W lamp produces three times the brightness as that of an ordinary 1200 W wash projector, generating an extraordinary ??tube of light with a natural beam of 8deg.

The aperture and graphics of the ??tube of light can be decided at will by using the 8 fixed gobos available, while a linear frost can be used to pass from a narrow hard beam to a more or less soft one.

CMY colour mixing and a colour wheel (8+1) allow the light beam to be coloured at will.

A Dimmer on a dedicated channel, stop/Strobe and high speed Pan/Tilt complete the ALPHA BEAM 300 configuration.

Innovative and complete, compact, service friendly and easy to install and use, ALPHA BEAM 300 is the ideal Moving Light Beam for ??live professional use especially ??long throw to cut through the brightness of stage washes or LED backgrounds, with Aircraft Landing light effects never seen before.