special deals on 24 or more 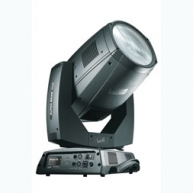 Alpha Beam 1500 is a new 1500W concept beam moving light that produces a super-concentrated and super-powerful parallel light beam for use with a ??very long throw Air Craft Landing light effect, always present at all the great shows in stadiums and arenas, but with brand new graphic, chromatic and movement feature decidedly superior and innovative.

Unequalled brightness and performances
Alpha Beam 1500 is ultra bright and ??eco-friendly: thanks to the new special Clay Paky optical group, it produces a much greater brightness than lights of the same power, achieving projection distances reached only by lights of thousands of watts, but with the energy consumption of a 1500 W light bulb. This enables it to be used instead of considerably larger projectors, with enormous savings in energy.

Much more than a Beam moving light
Alpha Beam 1500 has the widest effect section and can be used both as a Moving Beam and a Spot thanks to the 14 Gobos (6 rotating and 8 fixed), Focusing, 2 rotating prisms, CMY + color wheel, rotating beam Shaper, Dimmer + precision Dimmer on separate channels, mechanical iris. It also offers 3 combinable linear frosts on dedicated channels.